The Great Vembu Debacle (AKA Killing a Business with One Decision) 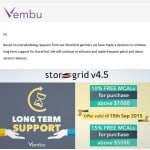 Today I received an email from Vembu telling me that they have changed their minds and decided to continue a product they previous terminated – what can I say?

Too Little Too Late Vembu!

Many years ago my company wanted to start offering cloud based backup solutions but – for reasons of compliance and connectivity – we wanted to use our own backup servers (so we hosted the client data).

After a great deal of research we found Vembu’s StoreGrid solution – a brandable platform that seemed to do exactly what we wanted.

We made a significant initial investment in the software (for a small business like ours) and made an even bigger investment in equipment, time, marketing and resources to put everything together. Customers began signing up and things went well. We had various hiccups and bugs that we attributed to the platform being young and growing. The GUI interface was appalling and over time, we realised that there seemed to be no new features being added and none of the bugs were being fixed. Support – which has been eratic at the best of times – got worse and worse.

One day we received an email from Vembu pulling the rug from under us by letting us know that ‘StoreGrid’ was no longer going to be supported and that they would only be offering their ‘BDR’ platform, on which all data is hosted by Vembu themselves.

Effectively this said to me:

The product you paid for is no longer available, the money you paid has been used to develop our in-house platform and now we want you to give all of your custom to us 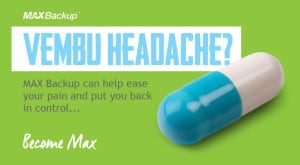 Needless to say, Vembu customers across the globe ‘went ballistic’.  I had a couple of phone calls with Vembu, telling them my thoughts (politely despite wanting to range) but to no avail.

This baffling business decision had customers flocking to other platforms (LogicNow even ran a special offer for disgruntled Vembu customers for a while!).

In late 2013 security researchers Patrick William and Steven Ciaburri identified multiple security flaws in the Vembu StoreGrid platform which they dutifully reported directly to them, chased and chased again.  Unfortunately they didn’t seem to great much response from Vembu – indeed it is likely that this was the nail in the coffin of the StoreGrid platform (not that they told any of their customers about this security hole).

We weren’t vulnerable to any of the security flaws but it showed a shocking lack of professionalism from a company tasked with safeguarding data.  At this stage we quickly abandoned StoreGrid and moved to a new provider: Logic Now’s MaxBackup solution.

We moved to the MaxBackup platform and honestly haven’t looked back since – its been an incredible breathe of fresh air.  The platform is flexible, regularly updated and with new features added all the time.  Their team is incredibly responsive and open to suggestions and feedback.

I have written a detail frank and honest evaluation of the platform in my post here: northumberlandwebdesign.com/i-t-support-networking/gfi-maxbackup-iaso-maxfocus-backup-review-problems-help/

I can only assume that Vembu’s turnaround in terms of the StoreGrid product is because what everyone expected to happen, happened – that being their customers abandoned ship.

Unfortunately I truly think that the damage is done – the Internet is awash with tales of Vembu abandoning their customers, of security problems and more.

The truth is its a great shame as the platform really had potential but rather than focusing on their core product, they instead tried to push too many other products at the same time and it cost them dearly.