My IT company has been using LogMeIn for many years but due to their lack of innovation and escalating costs, we decided to move – for more details, see my blog post here.  We researched options and happened upon ‘BeAnywhere’, a platform that not only offered more additional functionality than LogMein ‘out of the box’ but also – perhaps more importantly – seemed to be driven keen innovators with a responsive development team determined to push the platform further.

We’re now a month or so in to our migration, with 90% of our remote support now done via BeAnywhere.  It is, I thought, time for a review.  Here’s a simple run down of BeAnywhere, I’ll do another update at three, six and twelve months.

The pricing for BeAnywhere is comparable with pricing for LogMeIn Central alone.  Essentially this means that using LogMeIn Central for client management but with the free and restricted client on machines was costing the same (or more) than BeAnywhere but (and its a big but) BeAnywhere comes with a big box of features as standard, features that you have to pay extra for with LogMeIn (see below).

Unlike LogMeIn, BeAnywhere allows a user to have only one concurrent login and licensing is based on the number of concurrent technician’s you can have logged in so as your staff increases, this will be a factor but for us, even starting off with a license for every technician, it was still cheaper than LogMeIn.

As mentioned under ‘Pricing’, BeAnywhere has some great features fitted as standard, including (but not limited to):

When I am logged in to a customers computer, I love being able to copy files to and from their machine without disturbing them or taking control of their screen and mouse.

A great test case for this is if you need to make changes to a users HOST file for a hard-coded DNS entry, you can just copy the file to your machine, make the changes then copy it back.  Again, this is a standard feature of the software.

The file transfer window works like most FTP interfaces you’ve used with clear panels for the local and remote folders, and a detailed panel showing a queue of the file transfers.

Without disturbing the user working on a remote system, its also possible to review all manner of data from the PC you are remotely accessing, including (but not limited to):

You can review all of the services running on a target system.

You have access to all the options you would if you had access the services via the native services snap-in such as stop, start and restart.

You can also change the start up type of services (manual, automatic, delayed start).

If you have a user complaining of poor performance on their computer, you can view their systems running processes in real time just as if you were at their PC with Task Manager open.

While that may not seem like a big deal, it means that the user can go through the motions of what they are normally doing when their system becomes sluggish,  with support staff watching the processes to see what is eating up RAM and/or processor time.

Just as with Task Manager, its also possible to terminate processes.

The final great tool in the arsenal of a support technician, you can also view events from within BeAnywhere too.

Again, this provides the benefit of not tying up the computer while you are researching a problem.

The event viewer doesn’t have all the filtering options of the native windows event viewer but for most purposes its more than adequate.

In addition to the tools mentioned above, the BeAnywhere Support Express tool also provides information on:

Organising your client’s computers in BeAnywhere is very simple, with drag and drop functionality and more importantly, a tiered category system (allowing sub-categories) so what looked like this in LogMeIn: 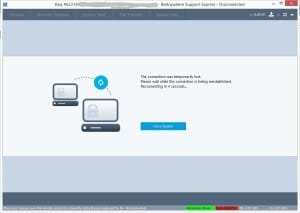 It sounds like a ridiculously simple thing (because it is) but this feature is something I love.  The number of times I’ve sat at a computer, repeatedly refreshing the LogMeIn Ignition list to see if a client is back on line (then having to scroll to find the client because Ignition’s sorting is broken and refreshing loses my place in the list).

The BeAnywhere client when disconnected simply waits 10 seconds and tries to reconnect.  It does this until it either successfully reconnects or you tell it to stop.

As I mentioned previously, the development team have been very responsive, helpful and open to suggestions.  Below are a few examples of my interactions with them so far: 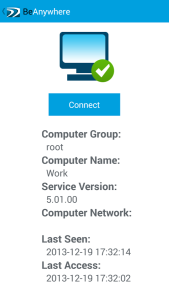 When I installed the Android App on my tablet, I experienced some problems and the app crashed each time.

I submitted the error to BeAnywhere and the development team got back to me within just a few days, confirming they understood the cause of the problem, apologizing for the error and letting me know the release date of the update with the fix (it was just a couple of weeks later).

The app now performs great on the tablet and I’ve used it many times to solve remote issues when in a pinch (travelling, etc.).

I was amazed really as my tablet is encrypted from end-to-end which causes problems quite a few apps and is the lesser known Samsung Tablet 10.1 Pro.

I also contacted the BeAnywhere development team to request some changes to the ticket API – no small request really.  They were completely honest with me and said that their development team is full scheduled for the next few months but that my points would be “addressed on the 2nd semester of 2015″.  Fantastic and realistic – I will post the results when I see the updates.

A feature I love and was frankly disbelieving of when I first tried it is the chat support utility in the web based BeAnywhere admin centre.

I was having trouble working out how to do something and decided to give the support chat a go, I was literally instantly chatting to a support technician (no wait time, no messing about with overly complex forms, etc).

Since then, every single time I have used the support chat feature, my problem has been resolved within minutes (or as is more often the case, they have explained something to my little brain in terms I can understand!).

Whoever the team is behind that little chat window, they are to be commended.

Like any software platform – particularly a young one – there is room for improvement.  What follows is a list of improvements or new features in order of priority that I think would take it from a good platform to an excellent one.

One of our technicians described installing on Macs as “annoying and complex”.

It appears that you can only generate the Mac installation links from a Mac Tech Console, not a Windows one.

You then have to generate a link and PIN for each install separately, as the Mac Agent requires entering the PIN associated with that install when you run it.

During the sales process, I mentioned that “I’d like to integrate the ticketing system with our in-house bespoke CRM/Job Manager web application – is there a well-documented API for the BeAnywhere ticket system?” and was hoping for a full-featured API for integrating with the platform.  Unfortunately however, this is not the case – at the moment there is not one API but rather a handful of APIs with limited options.

What surprised me most is that the most useful functionality – being able to read information from the platform – was the one missing, especially given that a ‘read only’ API is much easier to build as there are far fewer security considerations.

As mentioned further down however, the development team has already scheduled updates for the API based on comments from customers – great stuff!

In their defence, the BeAnywhere development team got straight back to me saying that while they agree they are valuable features, the team was concentrating on other core development at the moment to implement them.

One area that LogMeIn Ignition still has a jump on the BeAnywhere client that it will use the login credentials you entered to connect to a machine to log you in that machine’s lock screen with a single click – this is a real time saver.

LogMeIn Ignition also – admittedly not very reliably – stores login credentials for clients if you wish.  While obviously security is a concern, as long as my password is used as the basis for the encryption key used to encrypt the passwords, I don’t see it being a big worry.  For particularly sensitive systems (servers for example) I would store the details.  Again, when I mentioned this to BeAnywhere, they said this is in the future feature list.

Unfortunately at the moment BeAnywhere doesn’t seem to be update aware at all.  The BeAnywhere client can poll the windows update system to retrieve update statuses but this is very slow because its not done during CPU idle time and then cached (which would be great).

The latter change to the client would mean update information was available in a flash in the client and – more importantly – this update status could be fed back to the main BeAnywhere console/server to provide alerts, prompts and update based reporting.

Imagine – you could get an email when a customers PC has a critical update that needs installing.

So in summary, given the choice would I move to BeAnywhere again knowing then what I know now?

The platform is strong, with a great development team and excellent support infrastructure.

I’m frankly blown away by the positive attitude from every member of staff I have had any contact with, whether it be sales, support, development or management.  They clearly have a great company culture and team.  This sort of intangible is huge factor in a burgeoning company like this, I get the distinct impression that the team there has Tony Hsieh’s Delivering Happiness as their bible.

As I’ve said before, you get a measure of a man or a company not when things go right but when you encounter problems.  A reaction to a problem tells you more about who you’re dealing with and what you can expect than a thousand friendly transactions and here BeAnywhere have stood up very well (and believe me, I’ve bombarded them with stupid questions).

If I were a betting man, I’d buy shares in BeAnywhere right now as I think the product and company are only going to go from strength to strength.