After limping along for a couple of years with my 1st Generation Rooted Kindle Fire and my Galaxy S4 phone, I finally decided it was time to purchase a dedicated tablet. 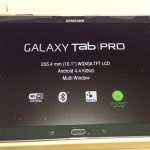 After much deliberation, I decided to spend a little more and get the Samsung Galaxy Tab Pro 10.1 rather than one of the standard models for the extra processing power and super high resolution screen (it’s ‘beyond retina’) and at £299 it seemed very reasonable for such a high specification.

I opted for a 10.1 inch model tablet because this is to enable me to actually work (program, email, administer servers, etc.) in environments where my laptop is too fiddly (generally public transport).  So on to the review: 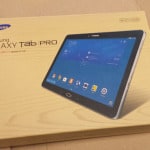 Yay!  It arrived from Amazon in just two days, the box it arrived in is barely larger than the unit itself which I found surprising.

What’s in the Box?

The contents of the box are very spartan indeed which is fine by me – I’d rather have an empty box and lower price than lots of extras I’ll never use.  All you get in the box is:

The tablet turned on and showed around a 70% charge, I ran through he usual Android set-up steps, connected it to the wireless in my office and put it on charge.  I immediately got a notification about a firmware update available so set that downloading.

As I have Samsung S4 phone, the styling and button layout was very familiar and the overall dimensions and styling are nice.  The unit was much lighter than I thought as I’m used to my little tank of a Kindle Fire (the Galaxy Tab Pro probably weighs about the same despite being much bigger and packing more hardware in).

Overall I like the feel of it but as I always find with tablets, I’m not comfortable using them for anything but reading or browsing unless it’s on a desk/table or in a case (or stand) – I’ve ordered one so we’ll see how that changes!

The initial set-up was exactly as you’d expect from Android – incredibly easy (especially as I already have a Google account so my common Apps were all automatically installed, my Chrome settings and bookmarks were synchronized, etc.  The most frustrating thing has been the prevalence of the Chinese Language setting which it doesn’t seem to be possible to remove – I’ve seen numerous instances of this discussed on line and seems to be because many models are coming from Asia with being re-flashed.  I’ve managed to fix all of the issues but it took a little effort finding the settings.

The first few days of use I must admit were a little underwhelming as I often find with a new non-essential bit of kit, you never really appreciate it until you need to use it, finding reasons to use it just isn’t the same. Additionally there was a slight learning curve and my case/stand hadn’t arrived!

The first weekend of use I was pretty impressed with speed and battery life of the Galaxy Tab Pro when using it for browsing, reading and playing chess. I also watched a couple of full HD movies on it and was blown away by the clarity of the ‘beyond retina’ screen. The sound was pretty good but like so many tablets, literally nothing that emits sound is mounted on the front so the volume and clarity varies hugely depending on how you hold the unit.

On Monday my Moko Galaxy Tab Case finally arrived and I have to say that for £11.99 the case cost, it’s made an incredible difference to how I use the tablet already (check it out on Amazon here). 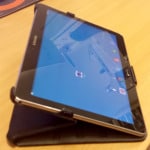 Why would the case make such a difference?  Primarily the comfort afford by the stand – when I’m sat in a chair with no desk (sofa, bus, train, etc.) typing with both hands on tablet leaves me stooped over my lap without the stand.

I was able to tap away on the bus, getting emails, web work and admin tasks done very comfortably.  When I tried this previously with my laptop, not only was it too big to comfortably use, the screen would constantly get thrown up and down by bumps in the road (and I had concerns about my £1400 Lenovo being shaken about everyday).

Additionally, knowing that my tablet is now fairly well protected, I’m much happier to throw it in my bag with my other odds and ends (running gear, etc.) so I always have it with me.

Weeks two and three of having the Samsung Galaxy Tab Pro 10.1 have seen me using it more and more in place of my laptop.  I attended the Parallels Partner Day in Amsterdam last week and only took my the tablet with me, using it to check and respond to emails between sessions and to write up my notes on the day for later reference.

I also found myself using it for getting around the city as the GPS seems to work better than on my Samsung Galaxy S4 Phone and the larger screen allows a better view of where you’re going.  Finally, as the flight didn’t have entertainment, I was able to watch a movie on it in full HD on the flight home! 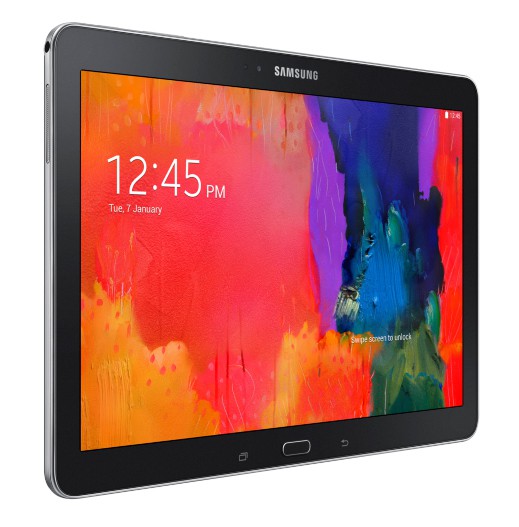