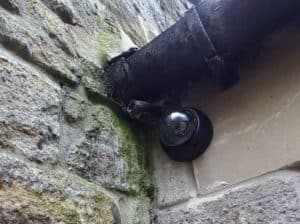 As I posted previously I’ve been adding some security to my home by adding IP cameras and recording/remote viewing via the excellent Synology Surveillance Station (a free application with any Synology NAS).

Unfortunately initially I went the cheap route and bought some Szsinocam  IPC-4033 cameras to test the water, this was a mistake for many reasons discussed in the post but primarily: 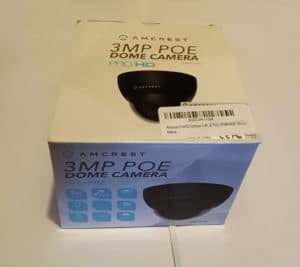 I wanted to add two more cameras to my deployment – obviously not Szsinocam ones. In preparation I purchased two more Synology Camera licenses (as the Synology Disk Stations only come with 2 out-of-the-box).

When I started researching cameras again, I found that decent POE (power-over-ethernet) IP cameras seem to fall in to two categories; really expensive or poor quality/support/performance.

In the end I found Amcrest to be one of the few camera vendors with an offering somewhere in-between.  I went ahead and ordered two Amcrest IP3M-956E IP Dome cameras and hooked them up, here’s how it went. 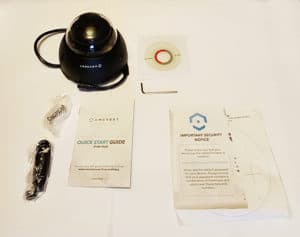 The Amcrest cameras came well packaged and with a decent selection of bits and pieces, comprised of the following:

As with anything I buy, I’ll be ditching the screws as these ones would rust in no time at all (this is after all a weatherproof camera and will be going outside). 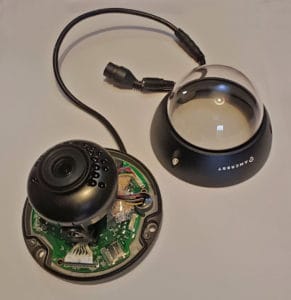 My initial thoughts were that the build quality of the camera seemed excellent with a nice heavy solid feel to the chassis.  Opening up the camera was very easy with the supplied allen key.  Once opened up, I immediately noticed that Amcrest had already done something I was planning on doing: adding a small silica sachet to the inside of the camera dome to absorb any moisture that could cause fogging of the dome or camera lens.

The chassis seems well made with a good rubber O ring to seal it together and the fixing holes are near to the allen key fixings to provide strength to those points.

The camera itself is mounted on a three way adjustable gimble, meaning with a bit of messing around you can get it pointing just about any direction you like while keeping the picture vertical.

One disappointment was that the cable to it was not detachable (to be honest I’d rather there was no cable at all – I’ll get to that later).

I plugged the camera in to my Linksys PoE+ Switch (LGS116P) and the camera powered up with no problems, picking up an IP address from DHCP, I used the excellent Fing network app to find its IP address (although many home routers will display a list of clients on the network), 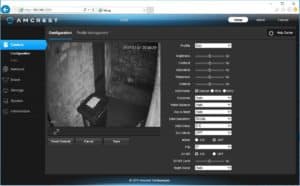 Compared with Szsinocam cameras, the Amcrest admin panel is a joy to behold with clear and simple options.  I note that I am also able to login to the Amcrest cameras without having to have any plugin installed (although I can’t view the live feed without it), this is useful as most of the time I’m using Chrome (which doesn’t support most camera stream plugins) and am logging in just to make a quick configuration change.

The latest firmware was already installed on the cameras, although I’m a little twitchy about the fact there hasn’t been an update in a year.

Overall the performance of the Amcrest cameras has been excellent, the picture quality is very good during the day (better than the Szsinocam models) but where they really shone was during the night when they switched to infrared, the contrast and overall clarity of the cameras is much better.  In the example below you can see the original szinocams at the top and the two Amcrest cameras at the bottom: 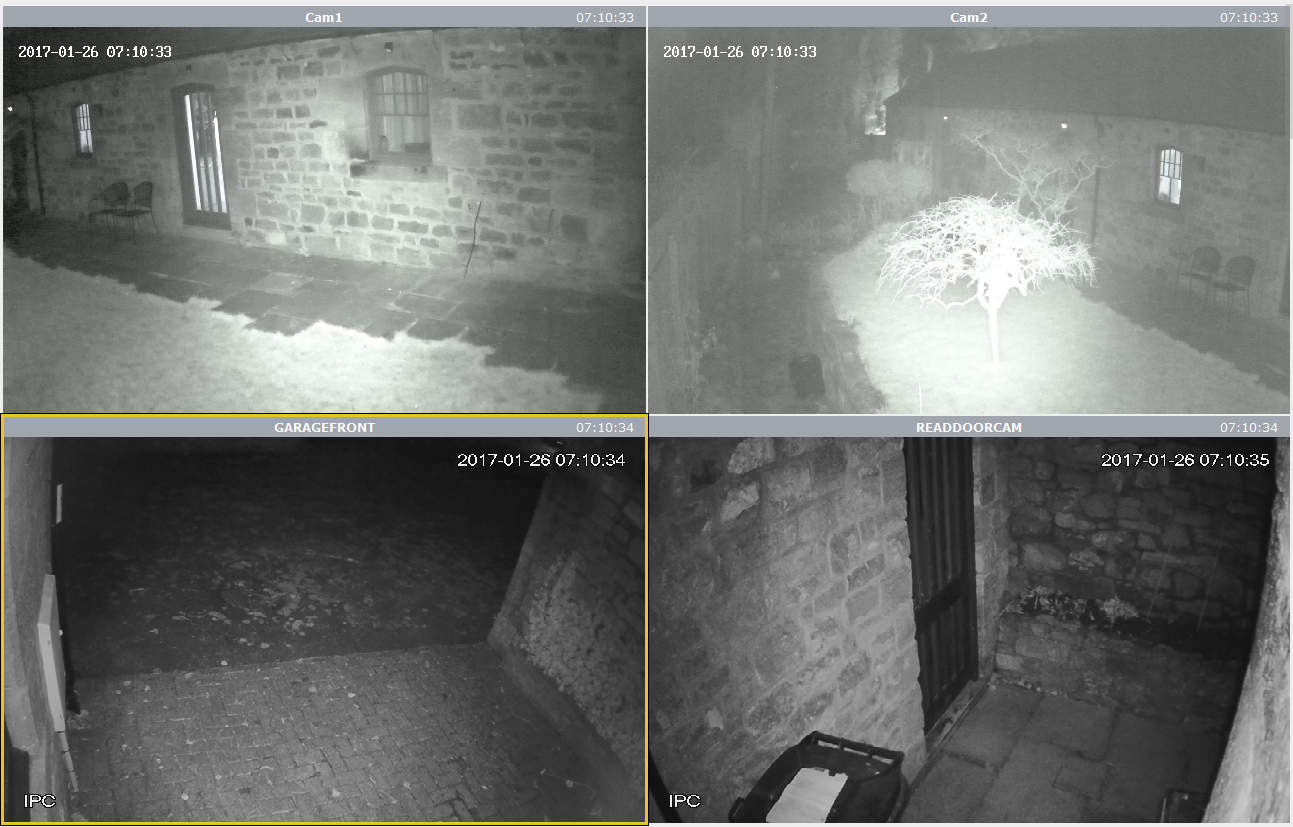 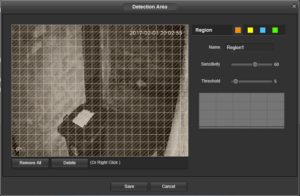 The motion detection of the Amcrest cameras is also very good and highly customisable with a simply grid overlay to allow you to view a live stream of the camera while selecting the areas motion detection should ignore.

I did a couple of tests of the motion detection and both a brief movement of my hand and also just shining a flash light in to the detection areas triggered an event and sent an email alert to me.

The physical installation of the camera is pretty much what you would expect, although I was a little frustrated at the cable fixed to the camera.  The cable cannot be removed or replaced and has not only an RJ45 connector but also a standard power connector, making it quite bulky.  This is fine if you are not worried about people tampering with the camera as all this bulky cable can simply be tucked above the camera but this is a tamper-proof security camera so I don’t want the cable anywhere to be seen (so it can be cut). 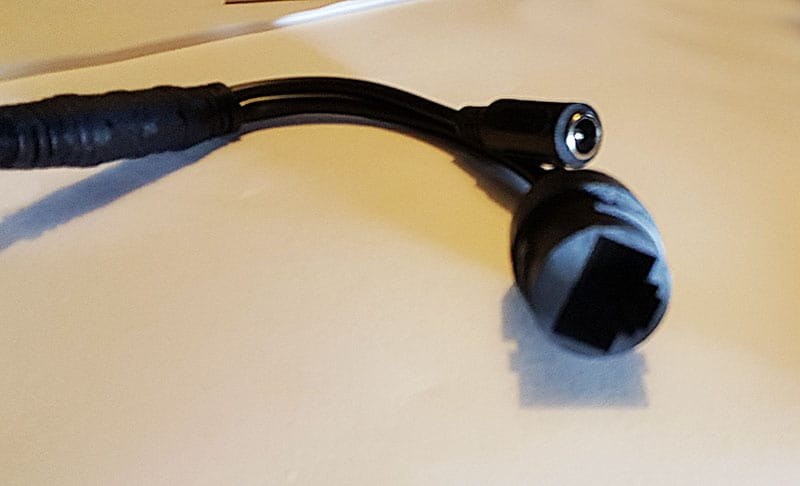 Unfortunately the big hefty connector means I had to drill a 25mm hole through my house wall to be able to get the RJ45 connector housing through (dragging the redundant power connector with it).  I would have preferred to see an RJ45 socket within the camera housing and a waterproof gland I could pass the cable through, enabling me to drill a very small 10mm hole in the wall and pass just the cable through before terminating.  An alternative would be if Amcrest sold an additional ‘ring’ to mount the camera on, providing an empty space behind the camera to securely hide the cables.

While the power connector configuration did frustrate me a little, in Amcrest’s defence this seems to be the same configuration on all IP cameras I’ve seen.  This small irritation was far outweighed by everything else about the cameras, including the software, building quality, performance and price point.

I submitted a support ticket to Amcrest to see how they respond, always a good test of a company, they did respond quickly and even followed up to see how I rated their support.  I asked how I could get a replacement dome (the most likely bit to be vandalized or damaged on a dome security camera), I received the following response:

Would I recommend the Amcrest camera ?  Definitely – I’ve just ordered two more so that I can decommission the two Szsinocam’s!