Home / Life / Colours, Concrete & Why My Mom is Awesome 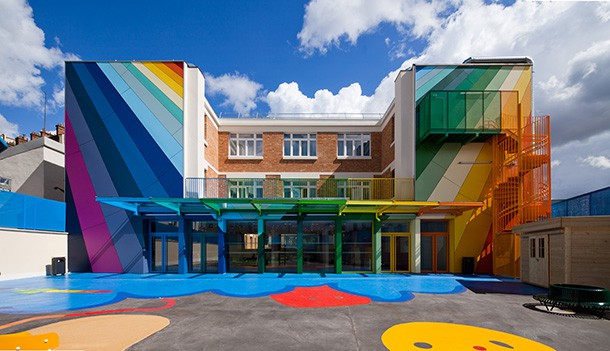 Colours, Concrete & Why My Mom is Awesome 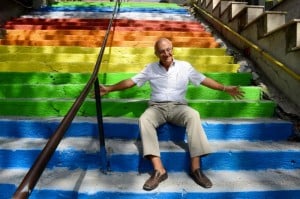 I recently read a wonderful article from the New York Times about Huseyin Cetinel, a retired gentleman in Istanbul that one day decided he’d had enough of the drab grey stairs in his neighbourhood.  Rather than complain – as so many of us do – he bought $800 worth of paint and turned them in to a bright rainbow.   When asked what his motivation was for this, he said he simply wanted “to make people smile”.

His particular tale took a twist and sparked national interest when his local council repainted the steps back to the the drab grey, causing uproar and mobilising large numbers of other ‘guerilla beautifiers’ who not only repainted the rainbow on the stairs but also began painting other stairs and streets.

As a some-time designer I have an interest in colour theory and the influence it can exert over mood and perception so the colourful steps struck a chord with me. For me I’m more likely to use scientific rules to help select complimentary and opposing colours to make up for my lack of artistic skill but it seems society is still learning the affects colour, art and imagery can have on us: just this month a number of products were showcased at the CES convention in Vegas that used coloured light to provide a better nights sleep, illustrating a newly discovered aspect of the affect of colour on our subconscious.

Going as far back as 2000, companies and organisations have experimented with coloured lighting to discourage negative behaviour, such as blue street lighting Glasgow which apparently caused a drop in street crime.

Whether it’s an inherited subconscious preference or something taught (intentionally or not), I know that my children have huge grins when they see bright colours, rainbows and bright wonderland-esque decor.

Schooled by the French 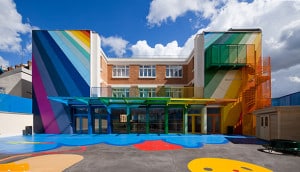 When researching design inspiration for the Wylam Playgroup website, I happened across an article about a Parisian school that had been given a makeover by Olivier Palatre Architects which blew my mind – the best thing about it was the vast majority of the impact of the concrete school yard was simply paint used imaginatively, something many schools could (well – should) be able to afford.

So What About Mom? 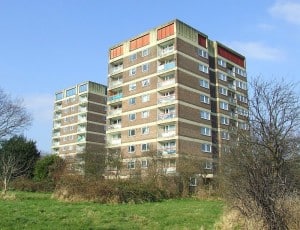 The Tower Block Since its Renovation

You’re probably wondering what my mom has to do with all this?  Well the story of the stairs in Istanbul struck a chord with me because when I was younger I lived in a tower block in Birmingham that was, at the time, brick and cement outside and undressed concrete in all the communal areas inside.  This made for a fairly dreary atmosphere once you left your front door.

Mom tried the official channels numerous times, speaking to the building janitor about decorating/beautifying the building who in turn spoke to the local council.  As you can imagine, nothing ever happened.  In the end, like Mr Cetinel, mom bought paint, rollers and brushes and set to work painting our floor of the block.  The other three tenants on our level liked the idea and pretty soon, it  was a bright beacon of cosiness with pictures on the walls and even a welcome matt when you stepped out of the lift (‘elevator’ to some of my friends).

To take a line from all the pushy viral nonsense out there at the moment: what happened next was amazing.  The lift in our block had a small window in it and as you travelled upwards you’d get flashes of grey as each floor went by.  One day on our way up something changed – ‘grey flash, grey flash, WHITE flash, grey flash, grey flash’ – we had to investigate.  Sure enough, other tenants had taken out their brushes and set forth. Over the following weeks, the grey flashes in the elevator disappeared, plants and pictures were put out, more walls were painted and grey concrete became the exception rather than the norm, making our little corner of the world a nicer place to live.

The Moral of the Story?

Well I guess the moral is something we all know already but that few of us act upon: that small improvements make can make a big difference and they don’t have to cost the earth.  That and that my mom is awesome.