Anyone following the news would be hard-pressed not to have seen the various stories and numerous patent disputes being fought at the moment.  It seems there’s not a single mobile device manufacturer that isn’t involved to some extent, from the big players like Apple and Samsung, to the smaller companies like Kyocera and (now anyway) Palm. 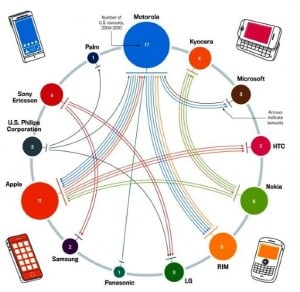 I’ve been following with interest as the mobile platform is one that affects many facets of the industries I play in – web development and Information Technology.

In all of these cases, the single most frustrating thing for me has been the abusurdity of some of the claims and the fact that these have been recognised as a legally arguable point.

The ‘Spring Back’ effect

I think the claim – which has been upheld by the U.S. courts – that frustrates me the most is Apple’s claim to own the patent for the spring back effect on user interfaces.

The ‘Spring Back’ effect  – known in physics as elasticity – is not a new concept and not new in it’s use in interface design or navigation.  Roll back to mid-1990s when Macromedia Flash was in it’s boom period, it seemed that pretty much every Flash website used some sort of elasticity effect.  I know I used it – maybe I should have patented the idea?

jQuery – a common web development JavaScript framework has methods which can be used to creat a spring back effect, is Apple going to pursue anyone using these methods (they can be used in Mobile apps and websites viewable on mobile devices).

The question isn’t really whether or not someone else has used an effect that Apple has patented – the real question that needs to be asked is should Apple have been allowed to patent the concept of ‘elasticity’ in the first place?  What’s next – gravity or perhaps acceleration?

A big one Apple is playing up is their ownership of the style of the iPad and iPhone.  In reality however, there is really only one format that makes sense for a tablet – flat.  Ergonimics dictate that it needs a wide border to hold (so you aren’t constantly touching the ‘live’ area of the screen and rounded corners make it more comfortable too.  The fact that Apple did it first doesn’t mean they should be able to patent such obvious features.

If similar things were being tried in other industries (automotive, flat screen TVs, etc.) it would be laughable (‘Our has 4 wheels arrange near the corners of the vehicle, they should find a unique style’)

The Big Samsung Vs Apple Case

The decision to award Apple $1,049,343,540 USD is being seen as absurd with facts coming to light that showed that the jury either didn’t understand the facts or didn’t want to take the time to review them.

The jury foreman has already stated that the damages were made to punish Samsung, despite specific instructions not to do so:

Yet the jury foreman specifically said after the trial:

The figures decided upon were to be “sufficiently high to be painful [to Samsung], but not unreasonable”

Additionally, it seems that the application of patent law (specifically Prior Art) on a major patent of Apples – our old friend the Springback effect – was not understood by the jury and the jury foreman may even have been biased when he explained his take on it to the jury members.

If you watch the video below at around three minutes you see the foreman discuss the basis for his decision on prior art.  He starts banging on about incompatible processors and such, none of which is relevant to prior art:

The specific instructions to the jury (which the foreman again insists the jury read) note that to find prior art, you only need to illustrate that the invention has already been done or even explained somewhere else (which Samsung had done).

Obviously Samsung say they are going to appeal but it’s hazy as to what of the jury’s discussions will be admissible in a court of appeal.

Whichever way this goes, the only losers in reality here are consumers and tax payers, in terms of competion-driven innovation, market-driven pricing and the costs of the legal process.