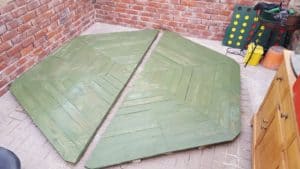 End result without Matting on

A couple of summers ago I bought my kids an Intex Padding Pool & Filter-Pump Unit for the garden, along with an Intex Paddling Pool Heater, it was money very we’ll spent and gave us hours of fun.

The only downside for me was that as it was on a stone floor, we had a few problems, namely: 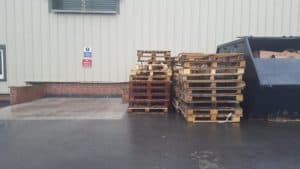 Free Pallets from a Warehouse

To that end, this summer I decided to build a wooden platform for the pool to go on, which I would then line with matting.

I had no intention of spending a lot of money on this so I turned to pallets for the main deck surface.  If you drive around any industrial or commercial area, you’ll soon find a company that needs to dispose of pallets and are happy to give them away for free.

Rather than building one large 8ft hexagonal deck which would be very difficult to move and store for winter, I made it in two halves so it can be covered and leant against a wall for storage (with a couple of blocks to keep it off the floor).

If you’re wondering what you’ll need for this project, here’s my parts and tools lists:

So the trickiest thing I found when working out how to do the deck was getting the angles right for the hexagon (as I don’t have a giant protractor lying around) so I did what I do best and turned to my computer.

The paddling pool is 8ft wide at its widest point but a hexagon shape is narrower on the flat sides than at the points so I made the struts (the points) of the hexagon 9ft wide (2743.2mm).

I created a scale drawing that told me what the distance should be between the ends of my main timbers, because of the two-half design, all the triangular segments are not the same size.

You can see the image of my plan to the right and you can click here to download it as a PDF.

After the initial layout of the struts, I worked on the deck a half at a time, one segment at a time for simplicity.

Step One: Layout the Struts 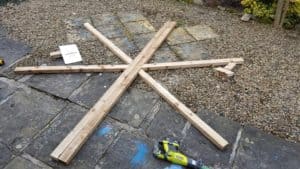 Fig 1: Laying out the cut struts

Cut four of the timbers you bought down to 9ft lengths.

Layout the struts roughly, lying down the two middle ones first.

Measure and draw a line across the two middle struts.

Next lay the two diagonal struts across the two middle ones, the two ‘inner’ sides should be right on the line you drew (see the yellow dotted in line the diagram/PDF above).

Now using a measuring tape and the measurements in the diagram for reference, adjust the angle of the struts until you have your hexagon shape, checking the diagonal inner crosses the middle struts right on the middle line.

Looking down on the crosspiece, you should now be able to clearly see where the diagonals need to be cut (where the middle two struts intersect with it), draw a line and cut.

Now you should be able to layout your struts as per fig 1. above.

I used wood glue and put a screw through the cut diagonals in the centre beam to hold it firmly in place but the real strength comes from the planks.

Now it’s time to start adding the planks to the beams.

There is a really simple trick that will save you a lot of time here. When I first

When I first started adding the planks, I was marking them up individually, cutting them and then fixing them in place, moving from one segment to the next, slowly building outwards.

Instead, pick one segment of the hexagon, screw a bunch of the planks on without cutting them to size.

Next, simply set the depth of your circular saw to the depth of the plans (or 1mm deeper) and but along the lines where they need to end. 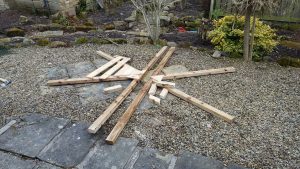 This method provides nice clean lines and is much quicker.

Next, simply set the depth of your circular saw to the depth of the plans (or 1mm deeper) and but along the lines where they need to end.

This method provides nice clean lines and is much quicker.

See the picture above and check the PDF.

As you get further from the centre of the hexagon, the planks required get longer – typically longer than you’ll get from a pallet so you need to join two in the middle.

I added some additional struts from the left overs of the 9ft ones I cut to give more support and provide a join point.

Even if you have planks long enough not to need a middle join, you must add additional support to the underside of the deck as the pool is very heavy.

I simply glued a lot of additional offcuts to the underside of the deck once it was finished, you can see the underside in the photo below: 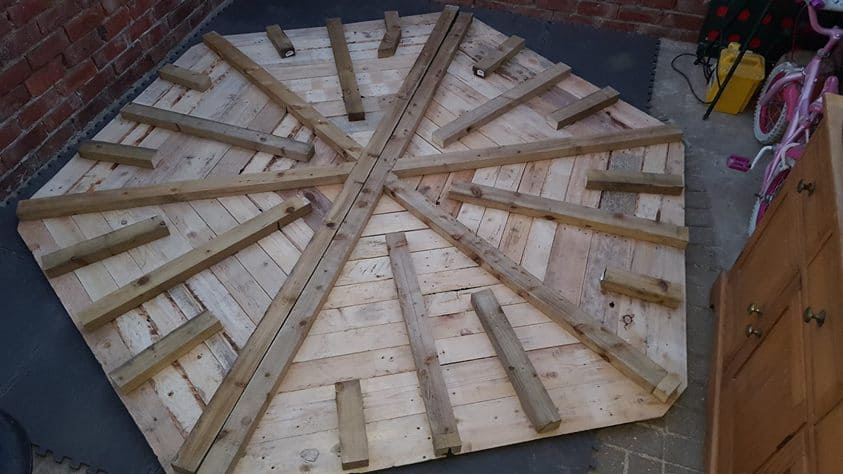 While in theory, the planks shouldn’t get very damp at all, I wanted to ensure they had at least some protection so I treated them with wood preserver and basic wood paint.

I also used the circular saw to cut a little off the ‘points’ of the hexagon and then ran the sander over them to give a nice finish. 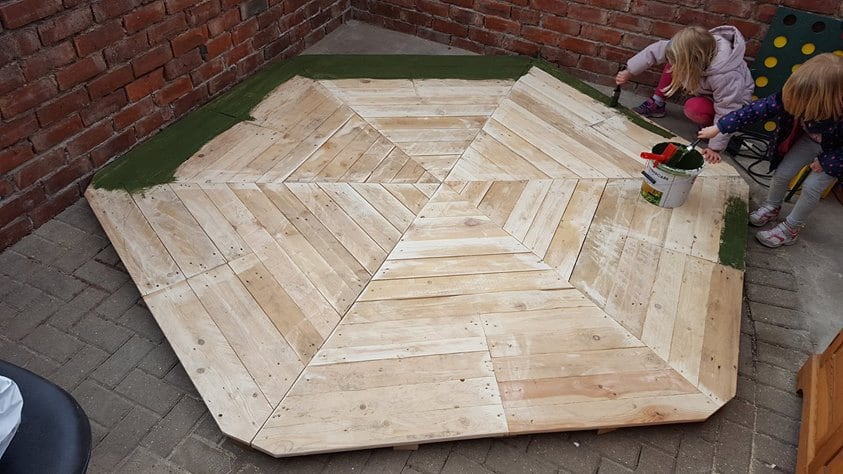 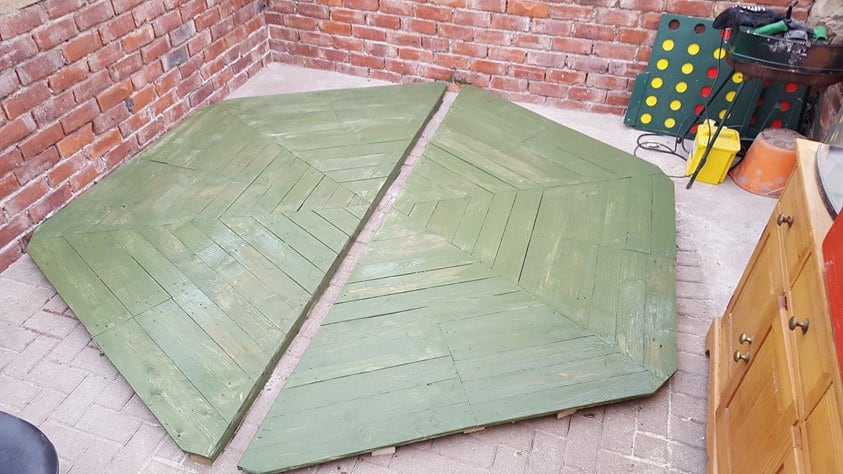 Next, I laid out the rubber matting on top of the paddling pool, moving it around to get the best use of ‘whole’ pieces (a good idea because when you want to store this for winter, you want as few pieces as possible – I number them for easy re-assembly too). 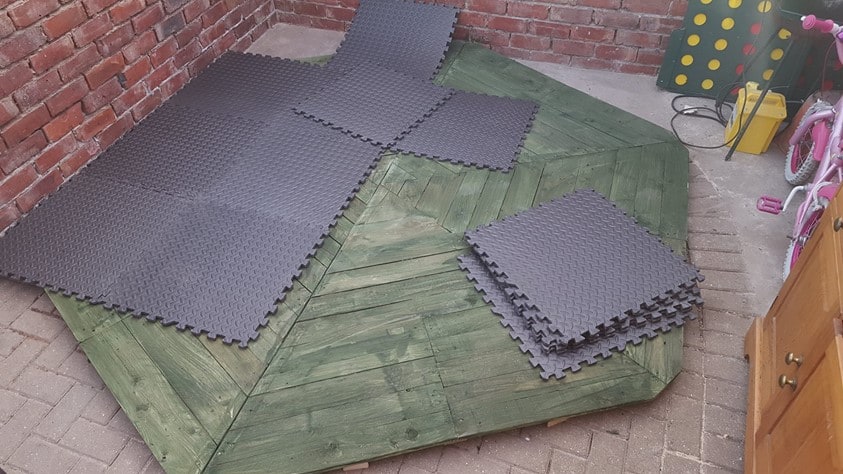 Then cut off the excess with a sharp knife: 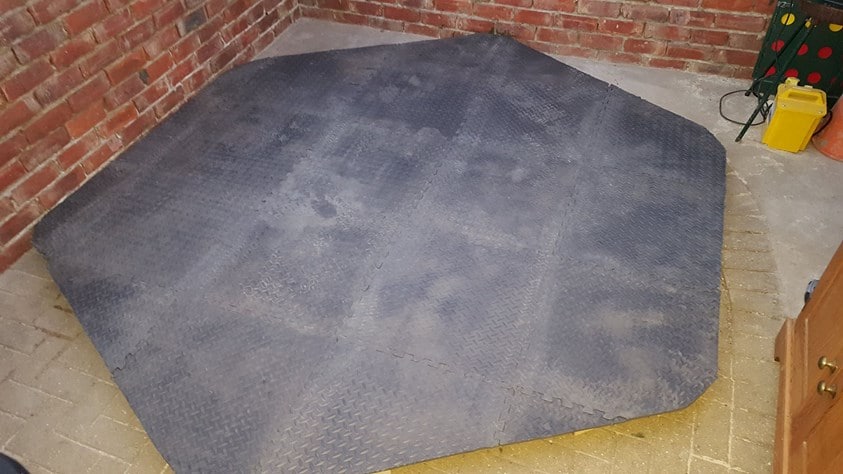 Step 6: Preparing and Filling the Pool 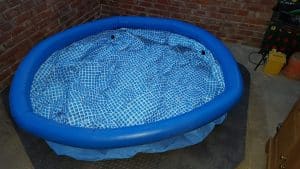 While the Intex paddling pools are indeed round, you’ll notice they have a hexagonal shape at the base so I tried to align this with my deck as much as possible.

Once I hooked up the heater and pump, I then started filling the pool slowly witth water.  If you wonder which way around to connect the heater/pump to the pool, the lower connector should where the water flows out of the pool.

Important note: at this stage, get as many creases out of the bottom as possible – you’ll have to walk round and round to do it but you’ll be glad you did (once the pool is full, any creases are there for good). 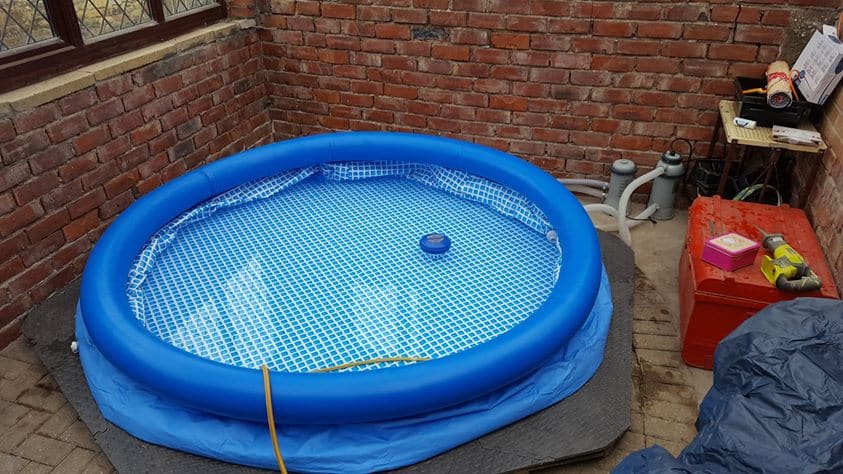 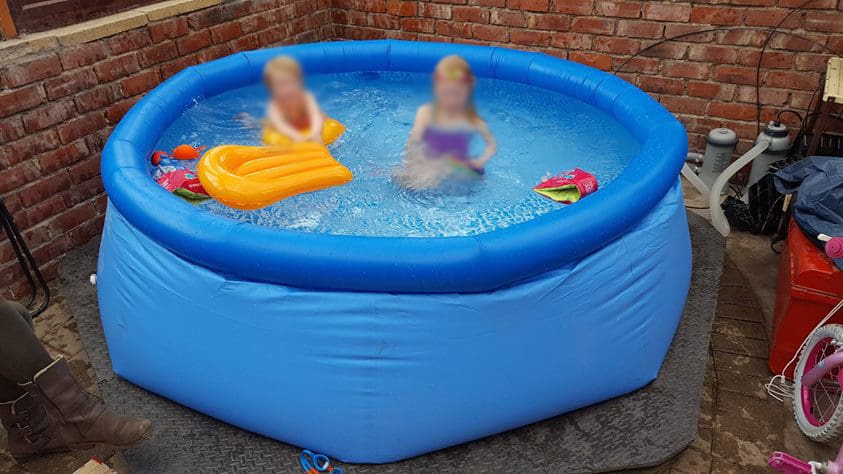