I recently decided to purchase a circular saw to replace my recently died unit. As our house is fairly old with an unusual shaped garden, running power cables can be a real pain so I decided to look at cordless/rechargeable units.

I was immediately taken with Ryobi’s ‘One’ series simply because they shared the same battery across multiple tools, reducing the messing around and cost of keeping a range of different batteries.

After a bit of deliberation, I ordered the Ryobi RWSL1801M ONE+ from Amazon and a Ryobi One Charger and Battery Pack (I opted for the cheapest battery initially to test it out).

The unit arrived and I immediately put it to work building an 8ft raised deck for a paddling pool.  From the reviews I read, I didn’t expect the small battery I’d bought to last long but it actually did pretty well.  The very thin blade seems to really reduce the power needed per-cut (and obviously produces less dust and makes for a nice clean cut). 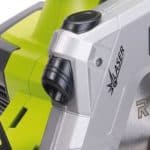 I had assumed that laser guide would be a bit of a gimmick but its actually proved to be really useful and is visible even when cutting outside on a bright day.

The saw has the usual ‘notch’ guide too. 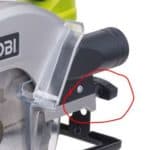 The cutting depth is adjustable via a simple finger screw at the back of the saw, is highly accurate and hasn’t slipped once to date.

For such a small saw with only a 150mm blade, the cutting depth is surprisingly deep, allowing me to cut through 2 x 3 timbers easily. 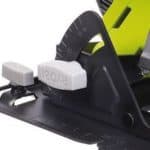 The Ryobi’s mitering ability really impressed me.  While making the decking and also doing skirting boards and door architraves, I had to use the miter a lot and as its an old house, the angles were rarely ever 45 degrees.  The mitering angles we consistent and the measure seemed to be spot on.

When you miter, the ‘notch’ guide in the base plate of the saw becomes less useful but for the most common cut (45 degrees), Ryobi have followed the standard and put a separate notch.

One of the few criticisms I have of the saw is that the cutting guard cannot be locked back when needed, when cutting some shapes this causes the guard to catch on the timber, meaning that mid-cut you need a free hand to open it, sometimes resulting in a messy cut at the bottom (and sometimes you have to stop mid-cut and re-jig things).

Would I recommend this?  Absolutely – on its own its a great saw but add to this the fact that its highly portable and can share its batteries with a full suite of other power tools makes it a no-brainer.  I’ve been doing a lot of work in the loft, in the garden and in the shed and not having to mess around with power cables makes setup and pack down quicker too.

A project for this summer is to make a treehouse for my kids and its going to be a lot easier once I have the full suite of rechargeable tools!

One comment on “Review: Ryobi ONE+ Circular Saw (RWSL1801M)”