In the interest of saving a few pennies and not having to drive 20 minutes to the nearest decent Indian restaurant, my wife and I have been having a Friday night curry in the form of a supermarket take out bag (or as I call it it a ‘curry in a box’).

We’ve now tried the takeaway curries from all of the major supermarket chains and for those looking for the answer, I’ve posted my top four in reverse order (best at the bottom) – bear in mind that no curry in a box will ever be close to a freshly made curry from a good Indian restaurant but if you’re looking to save cash too, hopefully the below reviews will be useful.

For anyone looking to easily make a curry at home, I highly recommend always having a jar of patak curry paste in the cupboard! 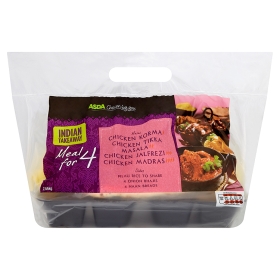 Asda’s takeaway Indian offering was the cheapest of the various options with the takeout meal for four coming in at only £11.  Unfortunately this was reflected in everything in the box.

The curries were tasteless runny affairs, containing shaped texture piece of what I assume were chicken, the flavours were vague nods towards their real counterparts (a little like the flavour you’d expect from ‘tikka flavour’ crisps), the rice was bland and the bhajis were small and greasy.

The naan breads were the only redeeming feature – a little doughy but ok and provided they are cooked correctly, it’s hard to get these wrong.

Summary: Give it a miss. 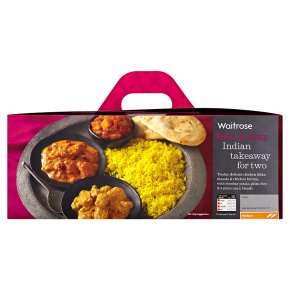 I had high hopes for the Waitrose Indian Takeaway, given that I generally find the quality of their food very good and it has the highest price tag of the takeaways reviewed here but unfortunately it was a big disappointment – it seemed like the chefs know how to make a good curry but stopped short of giving it enough spice to make it taste like a real curry.

All the dishes had flavour but not deep enough, making them all pedestrian affairs.  Additionally, I’d rather have bhajis (or samosas) over the bland bombay potatoes provided.

Summary: Close but no cigar – needs more depth of flavour and more heat.

Again Tesco have multiple offerings so I have reviewed our favourite, the ‘Tesco Tikka & Jalfrezi Meal For 2’ (the other offerings are Tesco Tikka & Madras, Tikka & Rogan Josh, Chicken Tikka & Korma and Korma & Jalfrezi).  This is the second cheapest takeaway box and unfortunately it shows.

Both of the dishes in the Tesco curry have a good amount of decent chicken in them, reasonable consistency in the sauce and the jalfrezi has a pleasing amount of peppers and a good tang to the flavour.

Unfortunately the tikka lets the side down with a bland and disappointing flavour.

Summary: Not bad but in trying to simplify the cooking instructions they’ve made it way more complicated and I’d rather pay a little more and have a better quality 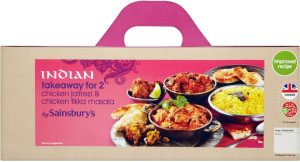 The Sainsbury’s curry’s have a good consistency, good depth of flavour and a pleasing amount of heat to both of the dishes, the jalfrezi is particularly good as supermarket curries go.  The bhajis are average and admittedly the naan breads are are sub-par but the overall package is the best of the bunch.

Summary: The best of the ‘curry in a box’ options across the supermarkets, this is the only one that I’m not indifferent to by the end of the meal and we always finish.