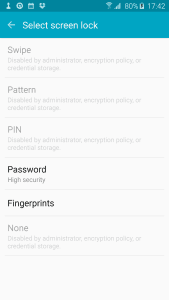 When I upgraded to a Samsung Galaxy S6 recently, the first thing I did was to attempt encrypt my phone to prevent anyone accessing my data should I lose it.

Unfortunately I discovered – to my horror – that Android developers have taken the absurd decision to allow encryption only if you use either a password “at least 6 characters, including at least 1 letter and 1 number” or use the fingerprint scanner.

You can no longer use a simple 4 digit pin for the encryption.

The only problem I have with the fingerprint scanner on my Galaxy S6 is its level of crapness (its 10 which is ‘really crap’ for those unfamiliar with the fecal scale).  So now – assuming I proceed – I have to enter a 6 digit alphanumeric password every time I want to unlock my phone. 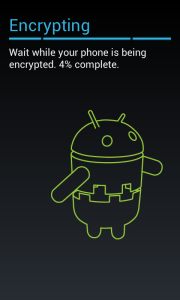 So when I’m out and about and want to make a quick phone call or take a quick photo – I have to go beyond a big clear numeric keypad and start fiddling with a qwerty keyboard to enter a 6 digit password.

Nobody other than the very paranoid are going to do this (and anyone really paranoid is probably not going to rely on native encryption), reducing the usefulness of the encryption feature to zero.  Why or why?