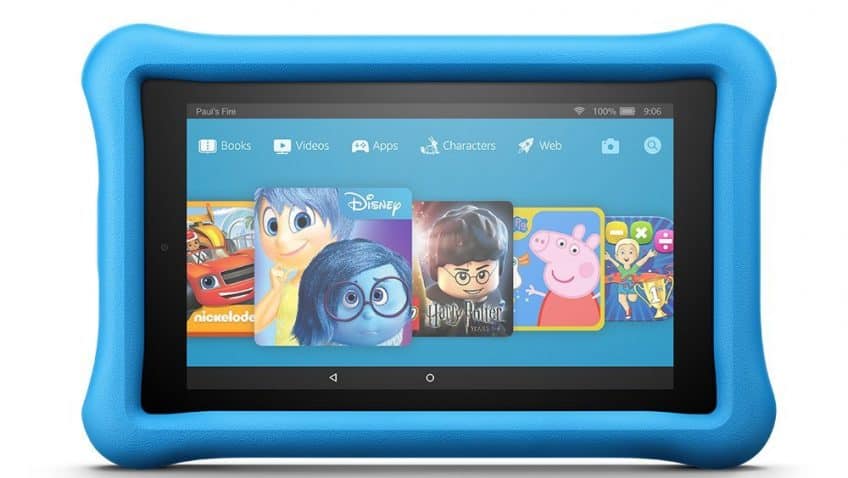 So I should preface this review by saying I’m a self-confessed Amazon fan-boy.  What do I mean by that?  I’m a prime member, my first e-book was a Kindle, my first tablet was a Kindle Fire, I have an Amazon Echo in every room, an Amazon Fire Stick on each TV and I pay for Amazon Music for my music.

It grieves me then to have to write some hard truths about the Amazon Fire Kids Edition Tablet, that don’t put it in a good light.

Note: I’ve had such a drawn out string of problems with these tablets, I started logging the problems here: https://bobmckay.com/life/tech-gadgets/amazon-fire-7-kids-edition-tablet-problems/ 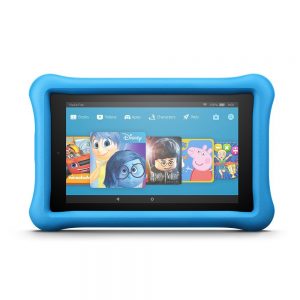 Firstly it’s important to note that the £99.99 Kids Edition Fire is actually just a £49.99 Fire HD 7″ with a spongy case added to it to provide some colour and a good grip to little hands (and if its dropped , its survives).

At the time of writing, the tablet comes with 16GB of storage and a quad-core 1.3GHz processor.

Once of the key marketing lines for the Fire HD is that it’s 2x more durable than iPad mini 4 – that’s great if I want to use it to beat someone round the head but in terms of performance it really is a case of you get what you pay for. 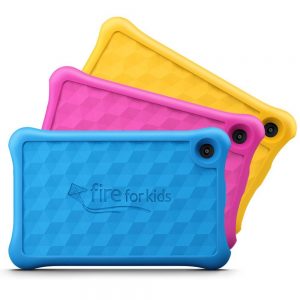 When playing games, the tablets showed poor performance and sluggishness (on almost every single game).  Skype was painful to use to the point where we just gave up (a shame as I was hoping the kids would be able to call their gran, etc.).

Despite buying a good quality SanDisk Class 10 Micro SD card for each tablet, both of them regularly have problems with the SD-card, with the kids regularly having to wait for the card to re-organise the storage or us having to restart the device to get it to work.

The battery life was the biggest surprise of all on these devices as it is truly abysmal, even with Wifi turned off (as it regularly is), we have to get the kids in the habit of charging them between every use.

I’ve had to do factory resets of both of my daughters’ tablets more times than I can count and had one replaced due to shite performance and all this in only 10 months of owning one and 7 months of owning the other.

Unfortunately the software is where this bit of kit really fails (applications are Amazon’s Achilles heel as demonstrated by the appalling Amazon Music Apps).  In their wisdom, Amazon have decided that every Amazon account you have and everything you have ever bought should be one every tablet you purchase.  So when I purchased a tablet for each of my kids, both my wife and I had a profile on them, with all of our books, games and movie histories on it.

Managing Kids profiles is an absolute mess with me regularly going in circles to do the simplest of things.  Once we locked the kids profiles down, making a change that requires parental consent isn’t simply an ‘override’ option – you have to switch from the kids profile to a parent profile, be bombarded with all your books/apps/movies again, change the setting and then switch back.  This would probably be fine on a powerful tablet but on these it takes an eternity.

The much vaunted “1 year of Fire For Kids Unlimited” is unfortunately for the most part a pile of rubbish with a few decent games in between but given that we wanted to the kids to be using Mathletics (which we had to buy separately), DuoLingo (free) and not the hundreds of poorly conceived games included in the free content, its a waste of money.  You’re better purchasing good well made games where needed and having a family Netflix account so your kids can watch movies/cartoons with that,

Ah the support.  First, let me quote Amazon “If they break it, we’ll replace it.  No questions asked“.  I discovered what a load of bollocks that was when the tablet I bought for my youngest daughter kept crashing and we had to send it back.  It took an eternity and I was bombarded with questions until in the end I refused to answer any more questions, reminding them of their pre-sale promise.

Once I finally got the replacement sorted, Amazon had charged me again and promised to refund once they received the replacement, this despite the fact that I was waiting to hear from the on details of how to return the item.

Unfortunately once I returned the item, all of the apps on my daughters tablet that are part of the “1 year of Fire For Kids Unlimited” vanished. I then spent 2 hours discussing the problem with their support team.

During this, I had to go through rounds of answering the same questions twice, sometimes three times and all with no resolution provided.   In the end, on my own I found a setting that had changed on the tablet that meant the subscription wasn’t being applied to my youngest daughters profile anymore.

Save yourself days of frustration trying to coerce the tablets to work, repeatedly disappointed children and a tie-in to Amazon’s “Pile of Shite Games for Kids” subscription by spending a little more and purchasing a proper tablet in the first place.  I’m planning on replacing my kids’ tablets in the January sales with a Samsung Galaxy Tab A 7″ and a child-proof case like this one.